Not Your Average Joe

Joe Flacco is anything but average

This story appears in ESPN The Magazine's Sept. 2 NFL Preview. Subscribe today!
JOHN HARBAUGH HAD seen enough. It was a cold and windy January night in Gillette Stadium, and his Ravens were on track to cede the AFC Championship game to the Patriots For the second straight year. That they were merely trailing 13-7 as the first half ended was a gift, in light of the team's plodding and conservative play. The coach yanked off his headset and marched toward the locker room, jaw clenched, chin leading the way. When he's in that mood, his players would rather lower their shoulders and take on a 250-pound fullback than lock eyes with their boss. But one Raven dared to stare him down: Joe Flacco. And after the two men exchanged glances, they nodded in agreement. For the entirety of Flacco's five-year NFL career, they'd been having the same debate. What kind of team do we want to be? What's our identity? When do we decide it's on the quarterback, not the defense, to get us to the Super Bowl? In that moment, in that one shared look, the debate was over. "I think we all realized," Harbaugh recalls, "that it was time."

Fox: Not about the money for Flacco

Just because Ravens QB cashed in doesn't mean his goals have changed.Story »
The coach marched into the locker room and straight to the leaders of Baltimore's defense, players with big personalities and bigger egos, some future inhabitants of the Hall of Fame. Harbaugh did not need their permission for what he was about to do, but he did want Ray Lewis,Ed Reed and Terrell Suggs to hear it from him first.
Here is the deal! All second half, we're cutting loose on offense. We're going to spread them out, run no-huddle, attack on every play. I'm putting the ball in Joe's hands. He's going to win the game for us. Let's go!
The defense erupted in approval. Harbaugh then shared the news with the offense, and the energy inside the locker room surged even more—Flacco's teammates had been waiting for this moment too.
And so in the second half a new era of Ravens football began. There was Flacco, rushing his team to the line of scrimmage, barking out audibles from the shotgun, controlling the game's ebb and flow. And with one razor-sharp throw after another, the quarterback carved Bill Belichick's defense apart -- a perfect fade to Anquan Boldin; a frozen rope toDennis Pitta; a back-shoulder arrow to Torrey Smith; a skinny post to Boldin; Pitta, again, over the middle.
The Ravens scored 21 unanswered points on three touchdown throws by Flacco. When he walked off the field up 28-13 with 2:11 remaining, he made a beeline for Harbaugh, a playful smirk on his face. He gave him a shove, then another. Harbaugh grinned, planted two hands on Flacco's chest and drove him backward in mock anger. Flacco came at Harbaugh one last time, grabbing him by the collar as if he might slam his coach to the turf. Both men laughed.
The entire interaction lasted under 10 seconds. But it was years in the making.
AT AGE 28, Flacco is among only seven starting quarterbacks in the league with a Super Bowl ring, but there isn't another player in the NFL whose supporters and detractors are further apart in their assessments. (Eli Manning probably comes the closest.) Those who see Flacco as the prototypical winner cite the fact that he's been under center for 63 victories (including the playoffs) over his first five years in the league, the most to start a career in the Super Bowl era. But his critics find it hard to believe he did anything other than ride Ray Lewis' coattails.
And that's just the beginning of the bile thrown Flacco's way. He's been called a flake, a choker, an overrated game manager and a Sesame Street character (owing to his resemblance to Bert). People have made fun of his eyebrows, haircut, inconsistency, cliché-heavy news conferences and goofy wedding photos. But in the end, the most frequent jab fired at Flacco is that he's just ... so ... boring.
It's a common misconception, albeit an understandable one. Part of it comes down to numbers: Flacco has never thrown for 4,000 yards or 30 TDs in a season, and he's never been ranked in the top 10 in yards per attempt. Analytics experts have constructed entire mathematical theorems to argue he's the very definition of average. When Flacco signed a $120.6 million contract in the offseason, briefly making him the game's highest-paid player,The Onion joked that Aaron Rodgers now needed $989 trillion to reflect his true market value.
But the boring label is not just a reflection of his playing style, of course. Flacco is a type-B personality in a type-A profession, a distinction that makes him not only unique at his position but oddly disquieting. A few years ago, then-offensive coordinator Cam Cameron approached Flacco the night before a big game. He had a proposal: How about you get up in front of the offense tonight and give us a fiery speech, the kind Ray Lewis gives to the defense? I think this is your night to get us going. Flacco looked at him as if he'd just proposed swimming naked across Chesapeake Bay.
[+] Enlarge 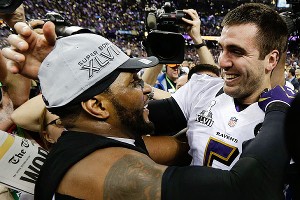