No Smoke for You!

I suspect Steve Bisciotti will have special dispensation for his cigars... 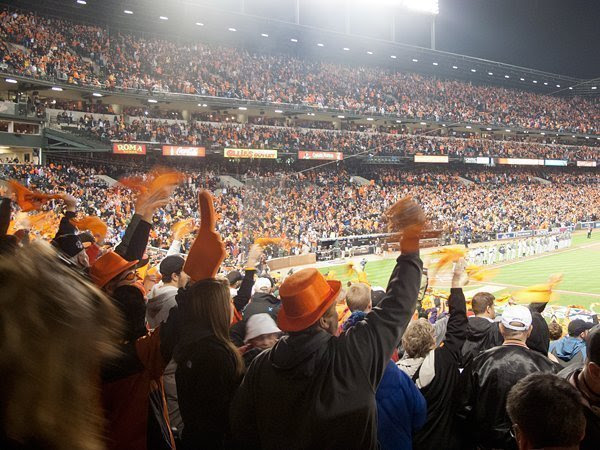 There will be no victory cigars at either Oriole Park at Camden Yards or M&T Bank Stadium this season, regardless of how well the Ravens or Orioles play.
The Maryland Stadium Authority will ban smoking at both stadiums during all future games and events starting March 4. Fans will be barred from “the burning of a lighted cigarette, cigar, pipe, or any other matter or substance that contains tobacco” in all areas inside Camden Yards and M&T Bank Stadium.
Previously you could smoke inside certain parts of the stadiums, like along ramps. The ban prohibits smoking within 25 feet of any entry, outdoor air intake, or operable window of the stadium structures.
The Stadium Authority has received complaints from about the smoking policy at both stadiums, said Michael Frenz, executive director of the state agency. The new policy also puts Maryland in line with other Major League Baseball parks and NFL stadiums, Frenz said.
Complete article here.

Well the cheerleaders have left, but it's a good time to review the parking lot rules that the tourists bring with them every year...
Rule #1 - When waiting for a parking spot, stop in the middle of the road, don't signal, and orient your car diagonally to prevent others from passing.Rule #2 - Always park on the lines, taking up as many spots as possible. Diagonal parking is preferred.Rule #3 - In a crowded parking lot, if you find a spot and have the opportunity to pull through to an adjacent one, drive up half way and stop on the line, taking both.Rule #4 - As you pull into a spot, if you see that the space ahead of you is empty and you see another driver signaling to take it, pull though and take it from him.Rule #5 - Always park close enough to the adjacent car so that the other driver must grease up with Vaseline to squeeze into his or her car.Rule #6 - When driving through the parking lot, ignore the painted lanes and drive diagonally from one end to another at a high rate of speed.Rule #7 - When stopped in front of a store and waiting for a friend or relative to make a purchase, make sure that you are stopped in the middle of the road. The same rules applies to picking-up and discharging passengers.Rule #8 - When a vehicle from the opposite direction is signaling and waiting for a parking space, position your car so that you are in his way and let the car behind you take it.Rule #9 - If you have Handicap license plates and there are empty spaces up front, use up a regular parking spot.Rule #10 - If you hit the adjacent car with your door and leave a dent, wait for a car, which is painted the same color as yours, to drive down the aisle looking for a place to park. Then back out, giving up your spot like the good guy you are, and park somewhere else.Rule #11 - When exiting a shopping center into a busy road, exit through the narrow "ENTER ONLY" driveway, stick the nose of the car into traffic, and wait.Rule #12 - Always leave your shopping cart tightly between parked vehicles.Rule #13 - Gather up all the coffee cups, fast food wrappers and other bits of trash from your car and leave them in the shopping center parking lot before you leave. Think of it as you helping out in these economic hard times by making sure the parking lot sweeper keeps his job.Rule #14 - If you are forced to change an infant's diaper in a parking lot, leave the soiled diaper under the wheel of the car next to you.Rule #15 - When another vehicle is waiting for you to pull out of a spot in a crowded parking lot, take your time. Adjust the mirrors, your seat, and the radio. Roll down your window, breathe in the air and eat your lunch. Feel free to go through your shopping bags and look at what you just bought.Rule #16 - When walking back to your car in a busy shopping center, gesture to other drivers waiting for a spot to make them think that you are getting in the car and leaving. Then walk between the cars to the next aisle and do it again.Rule #17 - When shopping at the mall, which requires you to load your bags into the car and go back in to do more shopping, do NOT tell the driver who is sitting patiently watching you load your car and signaling for your spot.Rule #18 - When walking back to your car, if you notice other shoppers walking past your car to get to theirs, press the buttons on your key chain remote so that your car's alarm makes a sudden loud "BLOOP BLEEP" that scares the life out of them.Rule #19 - If you don't see a speed limit sign posted in the malls parking lot, there isn't any!Rule #20 - If you back into a parked car, and the driver isn't with it, take out a piece of paper & start writing. This is especially effective if there are 15-20 witnesses. On a piece of paper write, "There were witnesses when I hit your car. They think I'm writing my name address, phone #, insurance information, etc., on this paper. But I'm not!"

One of my favorite JT covers...for lovers everywhere...

Spring is on the Way

OCEAN CITY -- The Seaside Boat Show, sponsored by the Ocean City-Berlin Optimist Club, turns 30 this year and a variety of factors have teamed to likely make this year’s event the biggest and best ever.
For the last 29 years, the annual boat show has helped mark a turning point in the winter season for many visitors to the resort and its hearty year-round residents and this year should be no different. Coupled with the three-day President’s Day weekend with Valentine’s Day in the mix, the boat show is a jumping off point for many area businesses closed for the winter and provides a glimpse of better days to come.
In the past, the Seaside Boat Show has battled tough winter weather and a sagging economy, and those factors could still come into play this weekend, but the 30th annual event has so much going for it this year more than ever that no obstacles appear too large to overcome. For one thing, the expansion of the host facility, the Roland E. Powell Convention Center, will provide an additional 24,000 square feet of exhibit space.
“This will be the largest one over,” said the Ocean City-Berlin Optimist spokesman Charles Smith this week. “The old stage on the second floor is gone and the first-floor space has been expanded so we have an extra 24,000 square feet to work with. For several years, we’ve had a long waiting list of vendors who want to come to the boat show and we’ll be able to accommodate them, and the vendors we already have certainly won’t mind having extra space.”
Read the rest here.